Activating John Paul 2 – Leadership and IT Institute – Part one

After lunch (nsima, veggies, plus a chicken drumstick – How I got served chicken when everyone else had beef is the story of Open Movement in living colour: After seeing a small closed container sandwiched between two big pots of nsima(pap) and beef I, with the audacity of the visitor, asked not “What else are you serving?” but “What’s in the closed small container?” Chicken, came the somewhat bemused reply. Anyways, 30 minutes after a nice lunch, my laptop was connected to the impressive big screen and slide controller was shoved in my palm. Keen eyes faced forward to hear more about WikiMalawi, WikiAFrica, Wikipedia, and the Open Movement. 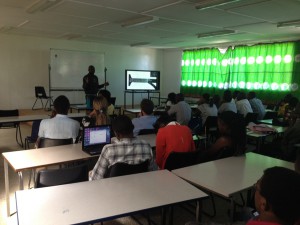 While organising this activation, I agreed with Declan, one of people running the school, that it will be very ideal to do it in two parts: general introduction to Wikipedia and WikiAfrica, and the actual activation. Today was part one: Introducing WikiAfrica and some of its aims (Establish the gaps in knowledge that exists on Wikipedia in Africa and find innovative ‘filling’ this gap, and assisting/supporting the expansion of content that already resides in heritage, culture, media organisations, and academic institutions across Africa); Introducing Wikipedia, the world’s largest encyclopaedia (and the dearth of articles from Africa in general, and Malawi in particular); Introducing Creative Commons as a means of expanding the range of creative works available for others to build upon legally and to share; and lastly, Introducing the Open Movement and some of the initiatives including/especially Massive Open Online Courses (MOOC’s). As this point, I was vying for attention with Three Dice, local hip hop (and a self-confessed triple times awesome musician hence the three in his). I finally managed to get his attention by using him as an example: Say supposed you have an article on Wikipedia, and 50 Cent wants to come to Malawi to do a charity concert. What are the chances that 50 will know of him? His face lightened as if someone had literally switched on the proverbial light bulb in his head/brain. Along the way, several questions came from the audience. To my surprise and joy, they were very good questions: what is the credibility of Wikipedia if anyone can edit? What’s to stop me from just posting nonsense there? “Phase one” lasted one hour with several questions at the end. Afterwards, a few students hung around and we had an interesting informal chat. I advised them how access to knowledge through the Open Movement can change the way they see the world. On the backdrop of Chilomoni, one of Malawi’s  peri-urban areas, that cannot be emphasised. And the story of the John Paul 2 itself, a story of hope and change, I couldn’t have been at a much more apt place. Part 2, which will involve activating a maximum of 10 students from the school will take place soon. Watch this space.