Open versus Free Resources and Softwares

Posted by Rexford Nkansah on Feb 13, 2014 in Blog, Primary, Wikipedian in Residence | No Comments

At the Open Advocate Training Course, currently in progress at the Africa Centre in Cape Town, the students enjoyed having Jonathan Carter today on the program, to discuss more about Open and Free resources and softwares.

Jonathan Carter works with the Praekelt Foundation based in South Africa. He is the Technical Manager of the foundation. Jonathan is a long-time software programmer, beginning his early programming since the days of age six. He he loved to play with programs in the days back then that had to be connected to TV screens to be used.

More than two decades now, Jonathan is stuck with open operating systems and switched between using Ubuntu to Debian somewhere in 1999. He considers himself as an artist in everything and he does many things as well.

Carter, wearing his Python-branded t-shirt, talked and explained from beginning how come Free Software since the days of Richard Stallman. We loved he explain what Free software should be using his nice presentation on his Debian Operating System.

To give a taste of how open softwares can be, Jonathan helped the five students in attendance to install Virtualbox and run the Ubuntu Operating system, a well-known distro of the many Linux-based operating systems in the world.

If you are in South Africa, try dialing the number *120*8864# and you will start to enjoy the work of Jonathan Carter in making Wikipedia accessible to non-sophisticated mobile phone users to learn and research on Wikipedia for free. Jonathan was a key player in developing such a system, and its without doubt, serving the great masses in South Africa who love to learn and do research. 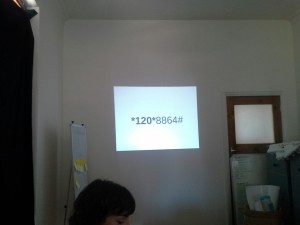 One more fascinating facet of Jonathan’s talk was pointing out the fact that many devices today (not necessarily desktop computers) have been and are using the Linux operating system. Without doubt, Open Softwares have had a significant impact in the community around us.

A few more images were taken plus notes, of which you can follow using the hashtag #openafrica14 on social media platforms, such as on Google+.

For full details of what the training course entails, please visit the Open Movement Course and Training Toolkit page on Wikiafrica.net