An important part of the Share Your Knowledge programme is the training and assistance that WikiAfrica provides for content partners. For many content partners, especially in Africa, resources are scarce and digitisation of their collections has only just begun, whilst for others adopting the requisite creative commons licence or even navigating Wikipedia’s internal systems is an overwhelming challenge.

With WikiAfrica’s support, via its Wikipedian in Residence programme, content partners make their content accessible through the creation of articles, and by uploading supporting media such as videos and images. Training is a vital component of this project, during which individuals and institutions are provided with the knowledge and tools to sustainably create, expand and enhance the content about their specialist area on Wikipedia. The Wikipedian in Residence Programme offers a paid position to individuals from across the continent who become responsible for encouraging, assisting, training and supporting Africa’s cultural and academic institutions as they share their institutional knowledge with Wikipedia and its projects.

A logical, sustainable extension of the Wikipedian in Residence program is  the adoption of a freemium model that is managed in the respective country of the Wikipedian in Residence, or alternatively, the “Wiki Entrepreneur”. In this process, Wikipedians in Residence receive one month’s rigorous training at the Africa Centre in all aspects of the Open Movement and at activating heritage, cultural and media content partners in their country. On return, the Wikipedians work on creating value for those institutions by assisting, training and supporting the donation of institutional content on to Wikipedia and its sister projects.

In 2014, a pilot version of the project in Malawi and Ethiopia is supported by the Prince Claus Fund.

Meet the Wikipedians in Residence:

Michael Mutisunge Noel Phoya is a Malawian artist, author and filmmaker mainly interested in pre-colonial, colonial, and post-colonial Malawi/Africa, globalisation, and new media in Africa. He is also interested in the sharing of knowledge especially through Open Educational Resources (OER).

Michael’s multi-disciplinary approach encompasses text, digital film, photography, and the web. He also facilitates learning platforms for Malawian artists and arts/culture/heritage organisations, and advocates for the growth of the arts in Malawi through live-recorded shows and public lectures.

Since 2000, he has been redefining platforms for publishing in Malawi and Africa by using non-traditional means. These have included a handmade book with 5 artisans [Malawi’s first], an audio book [again, Malawi’s first], and a web-based heritage portal.

He runs Kupeza Chambo, a virtual and physical artistic intervention space where Malawi’s heritage is celebrated.

Read Michael’s blog about being Malawi’s Wikipedian in Residence here. 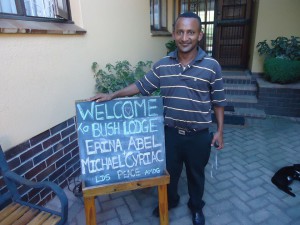 Abel Asrat was born and bred in the city of Addis Ababa in Ethiopia, from a small family where his father works as a researcher and his mother as a cloth designer. When he was born, he had the four-minute privilege of being the only child in his family before his sister joined him as a twin.

In 2007, Abel enrolled at university to pursue his higher education in the field of Mechanical Engineering after failing to make it to Architecture: his interest ever since he was an 8th grader. Despite pursuing the field of study in Mechanical Engineering, he was  interested in exploring and sorting his “life puzzle” to get a clear picture of his interests. Time after time, it become clear to him that he was not destined for Engineering, but communication. As a result he started to invest in reading, writing and connecting with people.

Unlike most of the students at his university, Abel took risks  to express his views, within university dormitories to senate halls. As a result of his active networking and connections, he made a lasting impact at his university prior to his graduation.

Abel’s aspiration in life is to break through people’s fear in exploring who they are, and in letting themselves become what they really want to be. He believes that information plays a vital role in enabling people to map their interest destination and reach their goal.

In the past few years, Abel has had the opportunity to work with different initiatives. These include AIESEC Ethiopia (the largest international youth organisation), where as an AIESEC member Abel initiated the opening of the AIESEC Mekelle Local Committee. He has also served as a Google Student Ambassador, Global Voice Member and Chair Person for a student-based initiative called Help for a Drop of Water. Abel has always enjoyed organising and volunteering at events such as Barcamp Ethiopia and TEDx Addis. He currently works as a Wikipedian In Residence for the WikiAfrica project initiated by the Africa Centre.

Abel is writing a blog about his experiences as Ethiopia’s Wikipedian in Residence.