WikiAfrica is an African initiative that seeks to support Wikipedia as a free and open encyclopedia providing truthful and widespread access to knowledge.

The project’s interventions are aimed at:

1. Activating, training and supporting a self-sustaining generation of new, dedicated and proactive Wikipedian editors from across the continent who are able to generate new articles and subjects relevant to contemporary Africa; and

2. Encouraging  the donation of content that already resides in heritage, cultural, news-gathering and academic institutions across Africa to Wikipedia.

This is what we do, but why is it necessary?

“We have an opportunity for everyone in the world to have access to all the world’s information. This has never before been possible. Why is ubiquitous information so profound? It’s a tremendous equaliser. Information is power.”

Often cast as a continent of crisis, war and famine, it is crucial for the morale and pride of the people of Africa that they are able to learn about its rich heritage and proud history, and have access to the significant, life-altering innovations and achievements of modern Africa and of today’s Africans. Truthful contextual information has the power to alter how people see, believe in, and interact with themselves, each other, their communities, countries and their continent. Balanced information allows for understanding and compassion, and can place small, but potentially volatile issues within a larger context. Knowledge has the ability to diffuse a crisis and heal wounds – both real and perceived. Thus, truthful information, correctly placed on a platform that is open and accessible to all, will also fundamentally change how people outside Africa view and interact with the continent.

Yet, Africa remains the least supported and represented collective of peoples, cultures, histories and knowledge on the internet. This is due to a variety of reasons, but the weak culture of online contribution in Africa is a significant factor. This reality is made starkly evident when one considers the lack of knowledge flowing from Africa onto Wikipedia. 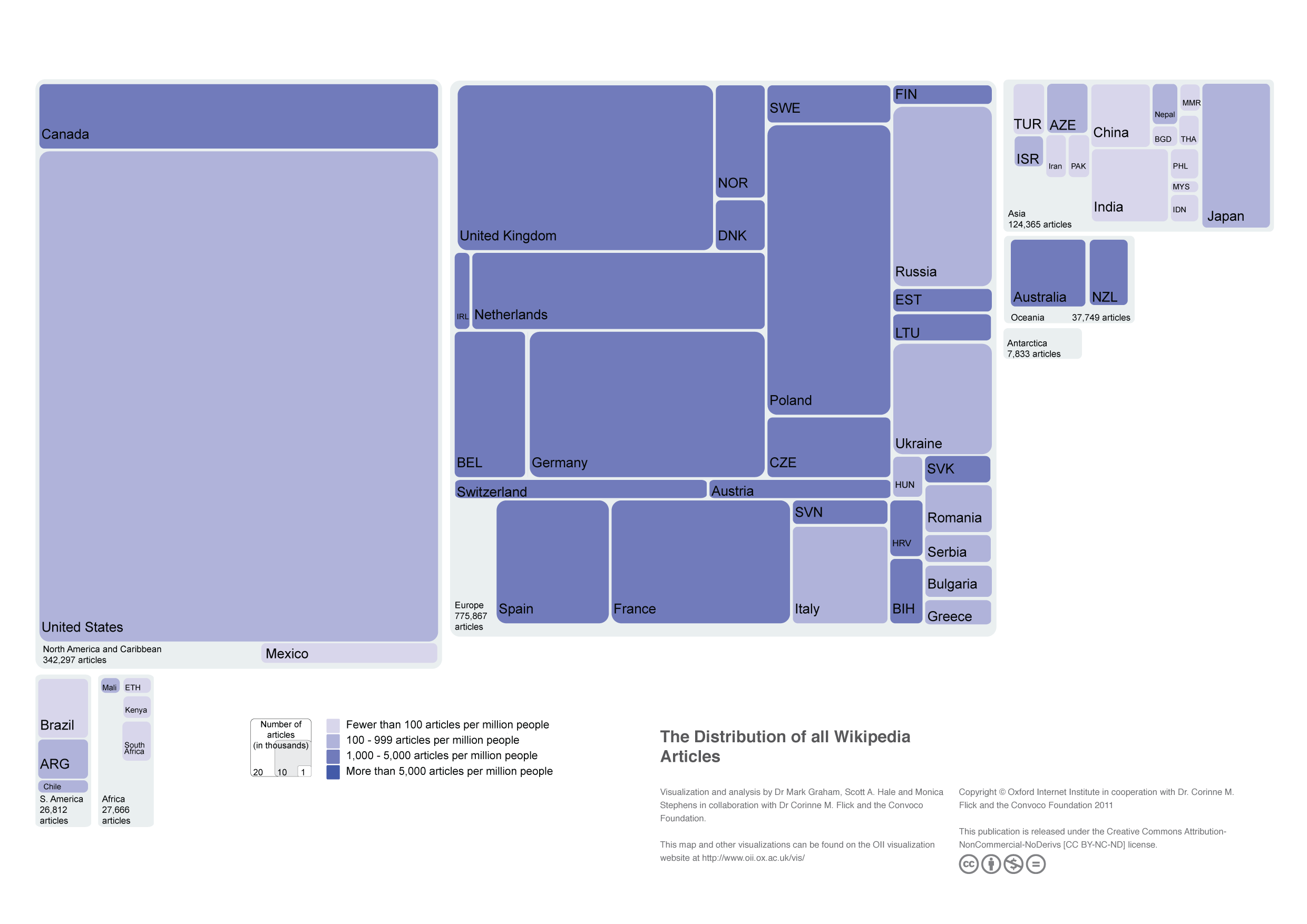 The distribution of all articles on Wikipedia. Attribution: Oxford Internet Institute CC-BY-SA-NC

Wikipedia aims to provide free access to objective and verifiable encyclopedia content that everyone can add to, change and improve. Since its inception in 2001, Wikipedia has become a powerful tool that allows people access to information on their country. It equips a global citizenry with the power to represent their own historic and contemporary realities truthfully, and in all their complexity. It has become a rich, dynamic and effective education medium that provides free learning materials and information. Use of the encyclopedia grows as access to new technology (including cell phones and computers – either online or offline) increases in the developing world.

Despite Wikipedia’s noble aims, the fact remains that the African continent is the least covered and supported collective of cultures, histories, ideas and languages on Wikipedia, WikiNews and their sister projects. Africa also has the fewest contributors per capita of any other territory. However, as more people across the continent access the internet via mobile technology (Africa is now the world’s 2nd largest cellphone market with 600 million phones used daily), there is an imperative for Africa’s historic, contemporary and daily realities to be truthfully represented and included in the world’s most accessed encyclopedia.

These inherent deficiencies within Wikipedia relating to geographic representation and participation, have been acknowledged in Wikimedia’s Strategic Plan published in February 2011, which includes the following :

Increasing both the total number of editors, and their diversity, is a key priority for the Wikimedia movement. We need to improve our dispute resolution processes to prevent editor burnout. We need to recognize and reward editor excellence. We need to invite readers to become editors — particularly women and people in the Global South. We need to improve the editing interface in order to reduce barriers to participation. When people try editing for the first time, we need to support and coach them.

Through 2015, the Wikimedia Foundation will:

Encourage the health and growth of Wikimedia communities and the projects they sustain.